The sea is an unknown frontier filled with unlimited potentialities.
Let’s create new ideal cities to coexist with the Earth!!

When we look at the Earth in a universal view, it is a tiny little planet in the vast universe, but its beautiful shape shining blue in the pitch‐blackness gives us an unconditional inspiration.

However, when we turn our eyes to the current condition of this planet from a global viewpoint, various problems are piled up in the world, such as chronic environmental problems, unceasing conflicts, population and food problems, and so on.

To solve these problems, international organizations, including the United Nations, have been seriously discussing and tackling those problems, but the current condition of the Earth has come to a deadlock only with political countermeasures of advanced countries with no substance.

Expanding global-scale problems originally come from man-made disaster which was caused by humankind who has been apart from the nature and has continued man-centered evolution and development. Other than that, cosmic-scale change of solar magnetic fields and decline of solar activities of late years can be predicted to give a large effect to future natural phenomena on the Earth.

As everyone of us feels, the man-made disaster and crisis that all humankind faces, brought by the universal power of far beyond human knowledge, are for the whole globe and the whole living things that transcend individuals and nations.

Under such conditions, what should we do and what can we do?

The Earth is a large living organism itself and a Mother Watery Planet who gives birth and nurtures lives. Thus we are given lives here and now as a part of a large life of the Mother Earth.

For the Mother Earth, every one of humankind is her lovable child whom she has been continuing to give her own life to nurture and bring up. Those children have departed from the nature and continued their man-centered evolution and development until losing sight of the spirit of the Earth, GAIA. Her hurt emotions because of her children’s deeds seem to be expressed as the appearance of the Earth now.

We, humankind, should get close to the pain of the suffering Mother Earth, and might be responsible to revitalize the Earth and create a hopeful future as children of Earth who are given lives on the Earth, transcending boundaries of race, nationality, thought and religion.

It seems that there is no clue other than tackling our own problems sincerely to fulfill our responsibility as grown and evolved “global citizens”, who nurture our heart to love each other as a parent, as a child, and as a brother and sister, because we are a family who have the same home, Earth.

“Start of a project by the will of the Earth-conscious people”
This is something that we really have to do right now. This conception is to aim for creation of the “Multipurpose Emergency-Rescue Mobile Vessel System (MERMVS)”, equipped with a rescue system that can approach from the sky, the land and the sea in cases of emergency as measures to make provision for massive earthquakes and other catastrophes, which is one of the recent urgent issues, and also to enlighten people about the importance of “Recovery of Humanity”,

We propose roughly two purposes for the MERMVS. One is for emergency cases such as disasters. We actuate the MERMVS as an “Emergency-Rescue Mobile Vessel System” to contribute with transportation of personnel and goods, rescue operation, medical treatment, and so on. The other purpose is for ordinary times. We utilize the MERMVS as a “Future-Creating Ship” cruising around the world to create a new Earth civilization, harmonizing with the great universe and the great nature as one nation of Earth. We would like to deliver dreams and hopes to people in the world.

A project with the wisdom of “global citizens” gathered, which is not influenced by any kind of concessions.
This is what we propose, “Project Seatopia”. 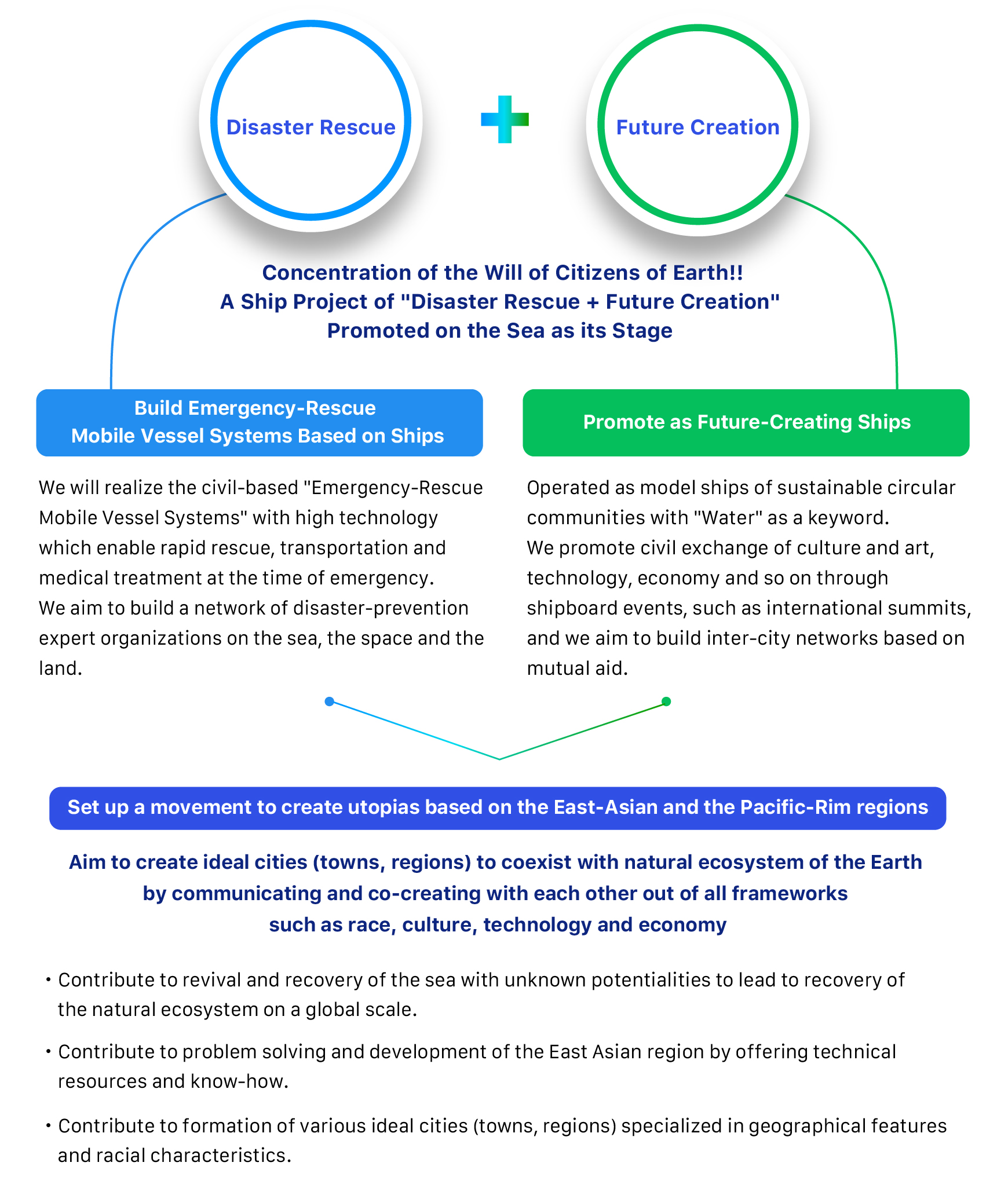 Excerpt from the Draft

Below is the excerpt from the draft of “Project Seatopia”, or its promotion plan.
Please contact us for the complete version of the draft.